A Catholic Pilgrimage to Japan This past month I had the great pleasure of going on pilgrimage to Japan. All in all, it was a thrilling, insightful, and invigorating experience! Now, some may be surprised to hear of a Catholic pilgrimage to Japan. It is, after all, not known for being a Catholic country. What I encountered on my journey though has shown me that was certainly worth the time and effort. What struck me, however, was how lonely the journey was. Not once did I encounter a fellow pilgrim during my twelve days there, and I often found myself alone surrounded by beauty, history, and solemnity.

Therefore, I wish to share a few of the places that had a profound impact on me, in hopes that more people will visit and learn from the incomparable example of the Japanese saints. Their courage in the face of brutality, their perseverance of faith, and the hope that they offer to all Catholics in trying times.

The first place I would like to share is the Hidden Christian Museum in Minamiarimacho. As the name suggests, it documents the efforts of the Japanese Catholics who suffered fierce persecution. I had read much about these things in preparation for the pilgrimage, but I was not prepared for what I saw there. As I walked through, I beheld the artifacts of a government utterly bent on destroying Catholicism. There was a 17th century signpost (they were placed all around) offering payment for dead Christians. There was a parchment which the government forced anyone they could find to sign. It swore that you rejected Christ and willingly wished for hell rather than believe in Him. Anyone who failed to sign was tortured and killed. There were also the fumie, pictures of Christ and Mary that everyone in a town was compelled to step on or face certain death. I beheld paintings of crucifixions, burnings at the stake, and related stories so dreadful that I dare not mention them here.

I was struck by the notion that not even the Roman martyrs faced so dedicated, so thorough a foe as the Japanese Catholics did in those dark times. I did not find despair there, however; I found courage! Alongside these cruel relics were the many means that the Catholics strove to persevere in Christ. Crosses hidden inside walking sticks, mirrors that, when reflected in the correct light, gave names for a baby’s baptism, and Buddhist statues turned into secret icons of Mary and Jesus. The Catholics did everything they could to keep the Faith alive. It was while looking at such things that I was compelled to reflect on myself. I wondered if I could do even a fraction of what they did.  How many times have I wavered in the face of even the tiniest resistance to Catholicism? How many times have I put away Christ from my public life when threatened with nothing close to the perils these people faced? There was great shame in the comparison, but great consolation as well. If Christ could empower these people to such great feats in such dark times, what could I accomplish if I truly accepted His help and followed Him? I earnestly wished that more Catholics could see with their own eyes the wonders that God worked in Japan.

Another place that had a profound impact on me was the Oura Cathedral in Nagasaki. The story behind this place is one of my favorites.  After 250 years of persecution and isolation, a Catholic church was finally allowed to be built again in Nagasaki in 1865. While this was intended to only be for foreigners (Christianity would still be illegal and punishable by death for Japanese until 1873), within a month of its completion the hidden Catholics of the area came to pray and receive the sacraments. They had endured without priests, without contact, and without books. They had passed on the Holy Faith only by oral tradition and had survived to see the Holy Mass celebrated in their homeland once again.

As I walked through the church and its adjacent museum, I was inspired by their example. If, by the grace of God, they could endure such terrible circumstances, what can’t we endure and overcome in our own times? While it is all too easy to see the darkness and grief that afflicts us today, we should strive to see the abundance of grace and the endless reserve of hope that God gives us through His Church and His saints. Even in the face of what seems a total defeat, we can see here in Nagasaki that Jesus Christ will have the final victory!

Yet another place that should not be missed is the Lourdes shrine up the hill from the Seibonnokishi Monastery outside Nagasaki. This place too has a fascinating story. In 1930, Saint Maximillian Kolbe went to a now open Japan to spread the Gospel. His first residence and early work was completed in the shadow of the Oura Church I previously mentioned. Kolbe found, however, that the site was much too small for his purposes and set out to build a new complex to expand his work. Everyone told him to build it in the northern area of Nagasaki, where most of the Catholics had settled. He instead built it far away from the city on the other side of the mountains to the east. It seemed to make no sense at all. That is until August 6th, 1945, when Nagasaki was the second and last city to be hit with an atomic bomb. The devastation was unutterable. Maximillian’s monastery, however, was totally unharmed and was a place from which help could come to the injured and dying of the city.

As I walked up the stairs of the mountain it resides on, I was mesmerized by its beauty. A perfect combination of nature and structure. Mysteries of the Rosary alongside flowers and trees. At the top is a Lourdes grotto. To the side is a sign designating to that place the same graces as the true Lourdes itself. And yet, I did not see another soul the entire time I was there! How could a place so significant, so beautiful, and so beneficial to prayer be empty? Here was a symbol of great hope, that even in the fires of a nuclear hell, God would not abandon His people. As I walked down alone, I wished that someone, anyone could have been there with me.

In the world at large there is confusion and discord. We should, as Catholics in all ages have, go on pilgrimage to find God, refresh our spirits, and energize us to continue the good fight! So again, I assert that Japan has much to offer us as Catholics. It should be talked about, learned from, and visited by the faithful; it can only be beneficial. So please, go and see for yourself, and bring a friend!

Cover image: Oura Cathedral, by Sean Pavone on Shutterstock.
All other photographs by the author. 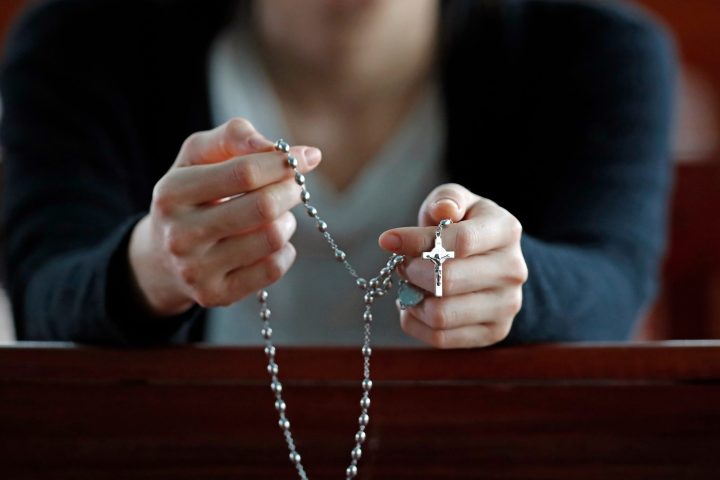